NEW DELHI: Prime Minister Narendra Modi on Friday, 05 Sep 2014 interacted live with millions of students and teachers across the country at Delhi Auditorium with about 700 students in audience and millions linked through satellite.

‘Yes, I am a taskmaster’

Responding to a student on Teachers’ Day, Modi said: “Yes, I am a taskmaster and it is not that I myself do not work and take work from others.”

He was answering the question: “People say you are like a headmaster but you appear to us as friendly. What kind of person are you?”

Modi added that he works hard and expects the same from others.

‘I have to be more careful of my words as PM’

Narendra Modi said he has to be more careful of his words now that he is the prime minister.

“When I was chief minister, I did not have to care much about what I was speaking, but now I have to be careful so that whatever I say does not cause harm to the nation. I remain conscious of what I say,” he said.

He also said that because of his long stint as chief minister of Gujarat, he did not find the role of prime minister very different.

The PM said that nation building should become a national movement and every individual should be associated with it.

Modi said if every individual associates himself with the task of nation building, “we can go very far”.

He said people who had achieved something in life and taken to a profession such as doctors and engineers should teach students in a school for one period in a week.

Modi also said he did not feel that adverse situations can come in the way of ambition of a determined individual.

‘Cleanliness should be part of character building’

The PM said that he needed help from every school in the task of building toilets for children, and cleanliness should be part of efforts at character building.

Modi recalled his recent visit to Japan and said he was told by an “Indian family” that students and teachers there together clean and mop up toilets.

“They said it was part of character building. How do we build national character,” he said.

Referring to his Independence Day speech in which he referred to absence of toilets in some schools, particularly for the girls, Modi said it was a very important task.

“I need help from every school. An atmosphere should be created,” he said.

‘Haven’t had time to see Delhi’

The Prime Minister admitted he hasn’t got any time to see Delhi because of his hectic work schedule.

“I have not got time to see Delhi. It is only home to office and office to home,” Modi said.

He lso said that his responsibilities have doubled and that he has had a smooth transition from Gujarat chief minister to the prime minister’s seat.

“There is not much of a difference between the working of a chief minister and prime minister. Working dimensions have changed, but in personal life there isn’t much of a change,” he said.

He also said the one thing he has to be cautions about as the prime minister is to ensure not “to damage the image of the nation”.

“You should play and sweat a lot, at least four times a day. Promise you will do it,” was the exhortation by Prime Minister Narendra Modi to children across the nation.

“How many are there who sweat a lot at least four times a day in play,” Modi asked the students gathered in Maneckshaw Auditorium here, with the event being telecast to all schools in the country and live streamed.

He asked the students: “How many of you play a lot and sweat four times a day?”

When most smiled and laughed saying they did not play so much, the prime minister said: “At least four times a day you should sweat a lot, promise you will do it.”

To which, the students responded with a loud “Yes”.

He also asked the students to read biographies, saying it would take them close to history.

“Please read biographies, then we will reach near to history. You can read different biographies” of people in sports, trade, films, science, he said.

“This should be our endeavour. We get information nowadays, and not gyan (knowledge),” the prime minister said. 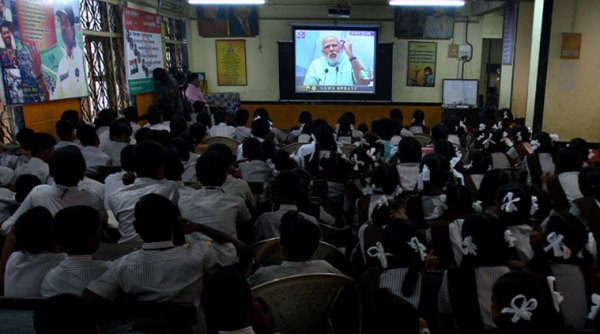