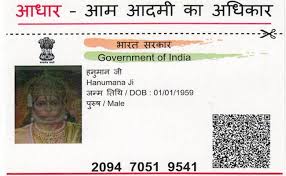 SIKAR, RAJASTHAN:  In the epic Ramayana, Lord Hanuman’s extraordinary feats are limitless. In a life devoted to the service of Lord Rama, his accomplishments include carrying an entire mountain on one hand and vanquishing some seriously bad demons.

In Rajasthan, he has been assigned a 12-digit number as part of the government’s Aadhar scheme which seeks to assign citizens a Unique Identity linked to their biometrics and fingerprints.

The card, issued in the name of “Hanuman-ji”, shows the deity wearing a crown and a string of pearls. It lists the card-holder’s father as “Pawan-ji’ (the Ramayana describes Hanuman as the son of Vayu, the Wind God).

The card was delivered four days ago to the post office in the Sikar district of North Rajasthan. A mobile number on the application listed led officials to the person behind the divine fake identity.

“I tried three or four times to get an Aadhar card made, but my finger prints were not being accepted, so I applied in the name of Hanuman and I gave my address and phone number,” said Vicky Kumar, a computer operator.Apparently surprised by the success of his endeavour, Vicky has now refused to accept the card.”It took us four days to trace this address, it belongs to a boy called Vikas but since he is not accepting it we will send it back,” said Bhograj, the top official of the local postal department.Copyright @ NDTV News