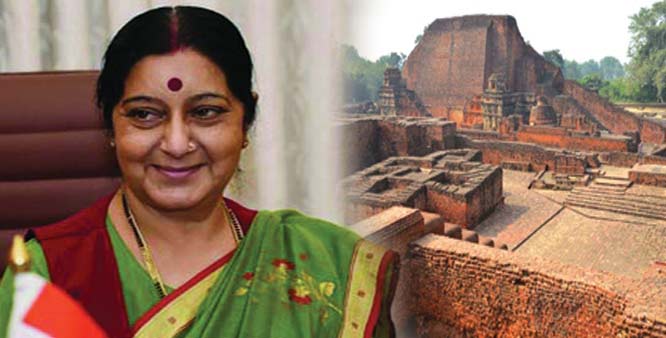 PATNA: External affairs minister Sushma Swaraj, on Friday, inaugurated the revived Nalanda University, renowned as a centre for learning till it was burned down 800 years ago by an invading Turkish army.

Swaraj said it was a matter of pride for her to inaugurate the academic session of the university after a gap of over 800 years.

“I am really upbeat that I got this opportunity …,” she said at an event held in the Buddhist pilgrim town of Rajgir in Nalanda district, about 100km from here.

The university will be built in Rajgir, 12km from where the ancient Nalanda University stood till the 12th century.

However, former Bihar chief minister Nitish Kumar, who played a major role in setting up the university, was not invited, university officials said.

According to the university vice-chancellor Gopa Sabhrawal, ambassadors of Singapore, Thailand and representatives of other countries involved in setting up the university were present at the function.

Classes at the varsity started on September 1 with 15 students and half-a-dozen faculty members.

The fully-residential university, to be completed by 2020, will have seven schools, all for post-graduate and doctoral students, offering courses in science, philosophy, spirituality and social sciences.