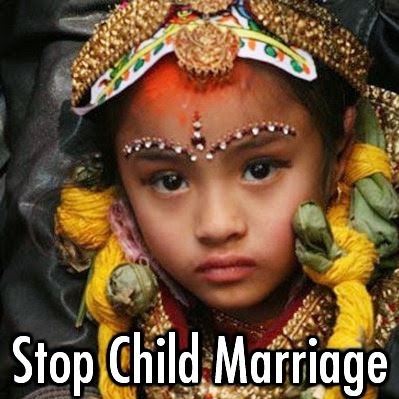 This social evil is still alive in our society since the 19th century and over 700 million women alive today worldwide were married at their younger age. The most suffering person of this evil practice is the girl of a poor family in rural areas. Some questions arise in our mind today. How this evil practice originated? Why is it still alive when our literacy rate is increasing day by day? Which are the sectors or the places where this is still followed? What government is doing to stop such practices? What are the government acts? What can we do to get out this practice from our society?

We all agree with the fact that this is an evil practice and must be stopped right away. But how it has been originated.

It originated about 1000 years ago when Mughals invaded most states of India. It prompted Hindu communities to marry their daughters at an early age to prevent them from getting raped from Mughal invaders.

Now, even after so many years of freedom, people have not overcome of their old thinking instead of being so educated especially in rural areas.

The birth of a girl child is assumed to be a curse and if it happens, then they are married early for their security. This is all due to

Their old thinking, prevailing curses and insecure feeling for the girl child are making the curse of Child Marriage still alive in our society. But the one who is suffering is THE GIRL.

Some people can ask How? They get a new family, what is there to suffer. But there is. I am trying to brief them in following points.

The only key to get rid of this evil is Education. Our government has also started many programmes and scholarships for girls to provide an opportunity to them to study.

This evil practice is not only practised in India but also abroad with countries like Bangladesh, Chad, Mali, Central African Republic, India, Guinea, Ethiopia, Burkina Faso and Nepal.

The analytic condition due to child marriage in India and the abroad can be viewed in figures in the following link.

Child marriage has not only affected the childhood of a child but the society as a whole. It has a strong intellectual, physical and mental pressure on the growth of a child either it is a boy or a girl. Early age mother not only impacts the health of the girl but also translates to mental weakness. Girls are usually considered as a burden for the father who has to collect more money to get the girl settled in her married life. But early marriage is the settlement? Rather than invest in the education of girls, she may turn out to be your pride.

With 1 in 4 cases, Tamil Nadu tops country in child marriages

No end to child marriages despite administration intervention

India home to one in every three child brides in world: UN

Why Rekha from Jodhpur is a bonafide braveheart