Female foeticide or infanticide, a girl child murder before her birth or after birth, is another shameful curse to our society. We can also say “our modern society” where girls are rising in their career leaving behind the boys but some people are still in their orthodox mentality.

Female foeticide means the selective abortion/elimination of the girl child in the womb itself, after the detection of the child’s gender through medical means. This is usually done under familial pressure from the husband or the in-laws or even the woman’s parents.

Female infanticide is the unlawful killing of newborn girl child.

According to the statistics, nearly 10 million female foetuses have been aborted in the country over the past two decades. Of the 12 million girls born in India, one million do not see their first birthdays.

In India, we worship Goddess “Lakshmi” for wealth and Goddess “Saraswati” for knowledge but we kill our daughters. Are we not afraid of doing such a shameful crime? Killing a child before the birth is equivalent to a murder.

The Pre-Conception and Pre-Natal Diagnostic Techniques (Prohibition of Sex Selection) Act and Rules 1994 (as amended up to 2002) dictates that sex selection by any person, by any means, before or after conception, is prohibited. The people who do so can be punished a jail of up to five years.

Doctors, lab technicians, hospitals or any other staff found to violate the law, will be punished. Hospitals and doctors can also lose their licences. But still we have this curse in our society.

Why there is so inequality still prevailing in our society? Why a boy still not a girl? Girl is achieving more and more heights in her career but we are not aware of her capabilities. Let’s see what people say who discriminate between a boy and girl.

These are the words of our surrounding people we used to listen whenever a birth takes place. Why they say like this? Let’s see.

But is this so? I want to ask some questions on the above points. Please answer who think the same as mentioned in above points.

The all we need is to raise our hands to abolish this crime from the society in whole. 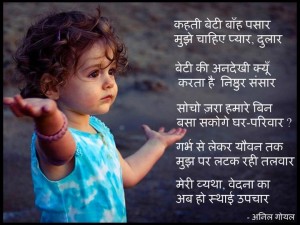