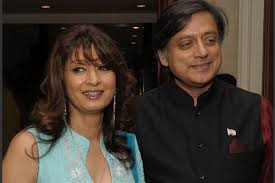 New Delhi:A team of All India Institute of Medical Sciences (AIIMS) doctors has submitted a fresh report to police on the mysterious death of Sunanda Pushkar, wife of former Union minister Shashi Tharoor, maintaining that she died of poisoning.

The new report by the three-member panel of doctors, who had conducted the autopsy on her, was prepared on the basis of the findings of the Central Forensic Science Laboratory (CFSL) which had examined Sunanda’s viscera, sources said.

They said that the team had again concluded like it did in its first report that her kidney, liver and heart were functioning normally and that her death was caused by poisoning.

The new report was submitted to police nine days ago.

The viscera report of CFSL in March had hinted at drug poisoning but police considered it as inconclusive. The police had then sent the CFSL report to AIMS for their opinion.

The three-member team has now submitted the “Subsequent Medical Board Opinion” to the police on September 30.

Sunanda was found dead in a 5-star hotel in South Delhi on January 18, a day after her Twitter spat with Pakistani journalist Mehr Tarar over an alleged affair with Mr Tharoor.